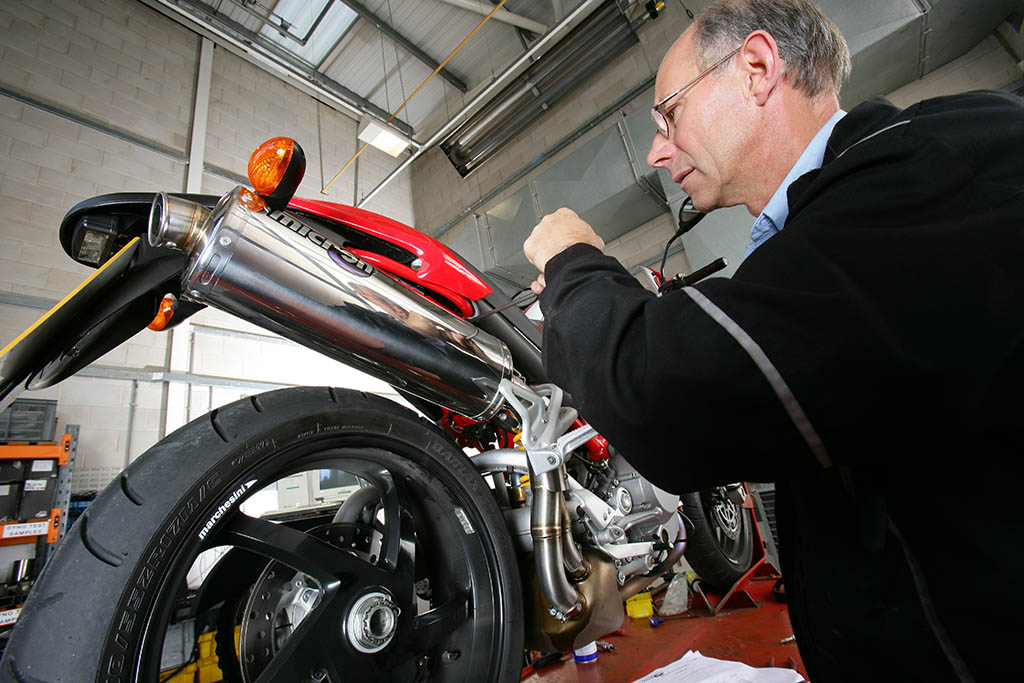 This isn’t just another guide that tells you to check every component of the motorcycle and ensure it’s not corroded and not damaged. This is a real-world buyer’s guide designed to help you purchase a great second-hand motorcycle, not a lemon.

When you’re buying a used motorcycle, it’s easy to let your emotions get in the way of logic. You don’t want to embarrass yourself or the person selling the bike by taking up their time and asking loads of questions but unfortunately, if you don’t follow these steps you’re leaving yourself open to buying a shed.

Start with the paperwork

Get the bike’s registration if you’re serious and run an HPI check. Make sure the bike gets a clean bill of health and it’s not a write-off or there’s no finance outstanding

Check the V5C (logbook) to see if the person named is the person selling the bike at the address you’re viewing it at. If not that might not be a deal breaker but ask questions.

Check the engine and chassis numbers. They absolutely have to match the ones in the logbook – if not, the seller is about to stitch you up.

Take a look at the bike’s MOT history, using a smartphone app like MOT History – is the mileage on the MOT certificates in line with what’s on the bike?

You should check the service history by looking at the dealer stamps in the service book. You don’t need to pour over every single receipt but if the seller says they’ve had a new gearbox fitted or had the bike setup on a dyno – ask for proof.

If any aspect of this process uncovers anything you think is suspicious, don’t be afraid to walk away. You can do a certain amount of research before you hop on a train to trek halfway across the country, but there’s nothing worse than buying a bike where you suspect something’s not right – it’ll never work out well.

Wait! Before you fire her up..

Before you fire the bike up, turn the ignition key on and study the dash. Are there any warning lights on the dash and if so, do they disappear when you fire the bike up? If they don’t, you’ve got a problem. Modern bikes will report any issues through the dash whereas older bikes (generally a 10+ years old) might hide a few errors but in the majority of cases, if there’s anything wrong with the bike’s ECU, an engine management light will appear on the dash. The seller might say:“Oh yeah that usually goes off after a while” or “That light has always been there but the bike’s always been fine”.

Mileage is not always a useful indicator

If you’ve got two, 20,000 mile 3-year old bikes and one’s spent most of its life cutting through city traffic in all weathers and the other has been used for a few touring holidays, you can pretty much guarantee the commuter has suffered more wear and tear. Bearings, gear changes, salty roads; these are things a Full Service History won’t necessarily cover. Mileage isn’t always a great indicator.

The consumables that cost you money

Apart from being a good indicator that the bike’s not had a pampered life, worn consumables can really mount up your costs. A worn (and even worse, rusty) chain and sprockets, brake pads on their last legs, brake discs that are looking scored or thin, headrace bearings that are notchy, tyres with under 3mm left on the tread – replacing that little lot could easily cost you £1,500. Don’t let a Full Service History fool you into thinking the bike’s good to go.

It sounds silly but a rear mudguard can be worth its weight in gold, especially if the bike’s been used for commuting. If the owner has fitted one, it’ll have stopped a majority of road crap from being flung over the rear shock and into the engine and in reality, loads of other hard-to-reach places on the bike.  It’s an insight into an owner’s mind and whether or not they care about looking after their motorcycle. Bonus if there’s one fitted, bummer if there isn’t.

Look for signs of a light drop

While crash damage might be obvious, a bike that’s been dropped off the stand is harder to spot and can often mask issues, such as a twisted frame. Check out the bar ends – are they scuffed, have they been painted? Look at indicators – are they standard? How about the mirrors, any scuffs there? Then look at the footpegs, check the tips to see if there are any light scratches. If you suspect it’s been dropped and the owner fesses up, then that’s not a great start.

Most owners will proudly tell you about their motorcycle’s modifications because they’ll think they’ve made the bike better and the chances are – they have.

Mods are fine, as long as you want them. If the wheels have been stripped and polished, if the bars have been replaced with Renthal bars then only you can judge if you’re happy with that.

Ideally, the bike will come with all the original parts, so you can either return the bike to standard and sell the parts if the owner can’t be bothered or keep them back to aid you when you choose to sell the bike.

Keep an eye out for parts of the bike that look noticeably fresher than other parts of the bike. If the screen looks brand new but the headlights have light chips, if the rider seat colour doesn’t exactly match the pillion seat colour these are all signs that thing have been replaced. Has the bike been dropped? Stolen and recovered or raced?

If the bike’s been down the road there might be obvious signs of crash damage. Check the bodywork – is it all the same colour, are any panels slightly different from others? Are the right stickers in place? Are there any signs of paint overspray on the rear of the panels? Is the radiator in good condition, are there any scratches on the base of the forks or the swingarm? A crashed bike isn’t ideal but if the owner declares it and you’re happy with the repair, there’s nothing to worry about.

Does it have all the keys?

The bike should have 3 sets of keys, two normal keys and one (often red) master key. One key should start the bike, open the petrol filler cap and also work the rear seat locking mechanism. If not, be wary.

The test ride is feared on both sides. The seller is wary you might run off with it or worse, crash it. You’re worried about dropping the bike and whether it runs as it should.

There’s a good way around it.

If you’re happy with the bike and it all checks out, you can cut your deal on the proviso that you pay the seller but they let you take the bike for a spin. If there are no mechanical issues, you’re good to go. If there are issues, you can get your money back and walk away.

By following the process above, you’ve minimised the risk of anything being wrong; the seller checks out, the bike has the right paperwork and it has been well looked after.

Of course, you could always get a seller who won’t honour their word and won’t give you your money back but you probably won’t get to the test ride stage if you don’t trust the seller.

Use your common sense

If the bike is a big chunk cheaper than anything else out there, there needs to be a reason for that. If it looks too good for the mileage, ask yourself why. A rusty loose chain is an insight into the mind of the owner, believe that! Don’t view the bike at dusk and don’t buy a bike that won’t start – no matter how much the owner tells you it’ll run when a new battery’s fitted, they’re wasting your time.


Good luck and let us know how you get on.