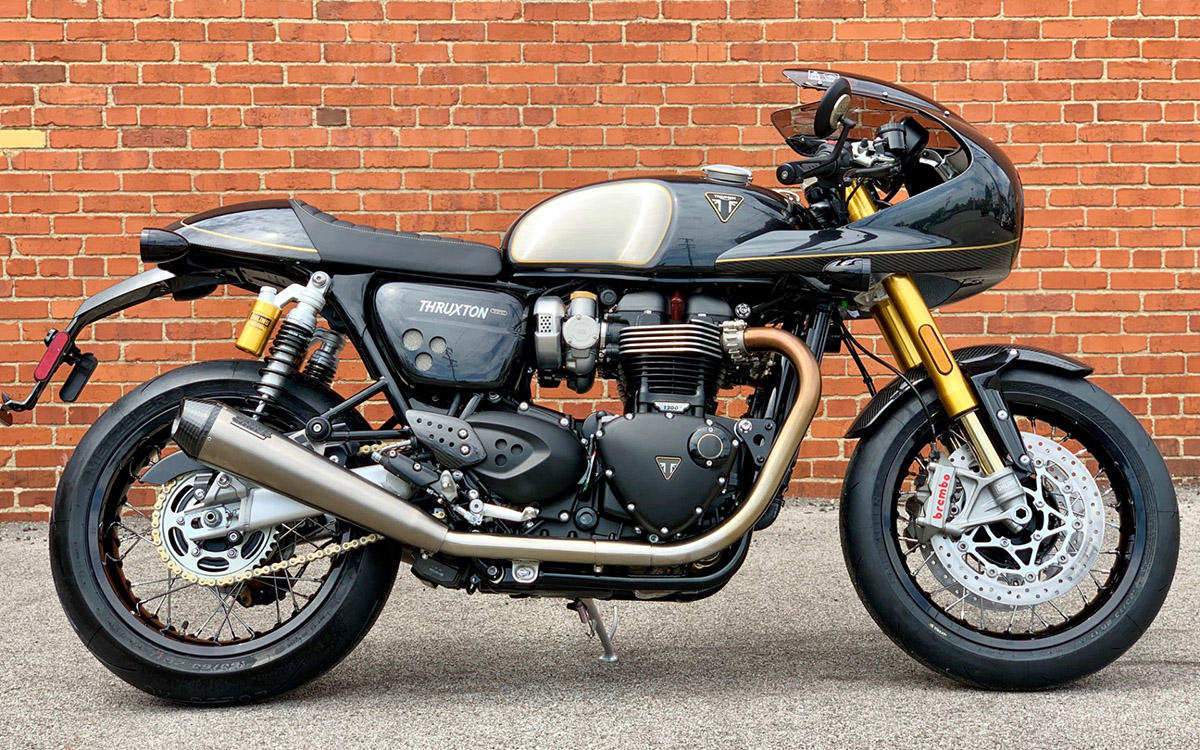 Cafe Racers look fast even when they’re parked up. There’s something about that hunched look you get when you add clip-ons to a naked bike, that makes them look primed for speed.

They originated in the UK in the ’60s. Younger riders were looking for ways to take their old bikes and make them quicker and look better.

The answer? Tune the engine, stick on some clip-ons and rearsets to allow you to hug the bike and then if you want to ultimate in speed, add a small fairing to deflect the wind as you nudge the needle towards three-figure speeds.

These days there’s a rising trend in Cafe Racer and Modern Retro motorcycles. A sort of backlash to ever more technology and a hankering for a time when man (or woman) rode proper machines. Ones that oozed character and made a bit of a racket, rather than a plastic fantastic bike that’s good at everything but lacking a soul.

We’ve picked a great selection of Cafe Racers to suit all styles and budgets. Some have fairings, others are naked, some are back to basics while others are exotic creations but they all have one thing in common, they look fast even when they’re standing still.

Here’s a full run-down of each of these great bikes:

More stylish than the standard NineT, the Racer has a beautiful, classic design to it; incorporating dropped bars, raised rearset rider footpegs and an elegant café seat unit. The addition of the Imola-style half-fairing provides more functionality while still remaining classy.

Triumph’s rare short run of bikes, TFC (Triumph Factory Customs) have released their latest, the Thruxton TFC. Triumph will limit the number of handcrafted units to 750. This model is lighter and more powerful than the Thruxton R. Completing the exclusive look, the Thruxton TFC has a stunning carbon fibre fairing, mudguards and heel plates. Also, a unique numbered TFC plaque and a signed letter of authentication.

This honest, cheaper, back-to-basics bike by Royal Enfield is one of their latest models of cafe bikes. Built from classical roots but with a modernised style, the Continental GT 650 comes in a range of colours. Constructed from a tubular steel frame, with 5-stage preload adjustable suspension, you’ll be comfortable and totally in control. Featuring a sculpted tank, rearset footrests and clip-on bars, this really looks like the cafe racers of old. The best bit is the price, which makes this a super accessible bike for all.

WSM hand-build their bikes to order and the Bol d’Or oozes class. The perfectly angled lines on the bodywork compliment the shape of the bike. An extremely lightweight epoxy Kevlar matrix 20L fuel tank reduces the weight of the bike for expert handling and performance. Based on the 3-cylinder engine of an MV Agusta F3 800, a seriously expensive and exotic bike itself, you shouldn’t be surprised at the price.

Built with style in mind, the Vitpilen 401 2019 has a classy looking silver-grey body with electric yellow pinstriping plus subtle colouring on the 17” bronze anodised spoked wheels and underneath the chassis. This bike is stripped back to the minimum and has clip-ons but no fairing. The engine is smaller than most which make this bike suitable for A2 licence holders. With the 44hp engine and lightweight construction allowing for better performance, even more, experienced riders will enjoy themselves.

The Best Cafe Racer for You

While you can buy a good-to-go Cafe Racer straight from the showroom floor, you could also build your own or buy one that’s already been converted. You can take a naked bike, remove the flat bars, add clip-ons and technically you’ve got yourself a Cafe Racer. Or you could take a Sportsbike and remove the fairing, add a round headlight for that minimal look and hey presto, you’re ready for a blast to Brighton.

If you want a reliable bike with lots of character, you’re best buying a factory-made Cafe Racer and then, if it’s not quite special enough, customising it yourself so you stand out from the crowd.

Do you know roughly what you’ll need to budget to insure your Cafe Racer?

We’ve created a motorcycle insurance estimator that asks no personal questions and takes just 1 minute to fill out. It’ll give you an accurate idea of what it’ll cost to insure your bike.