Moped vs Scooter – What’s The Difference? 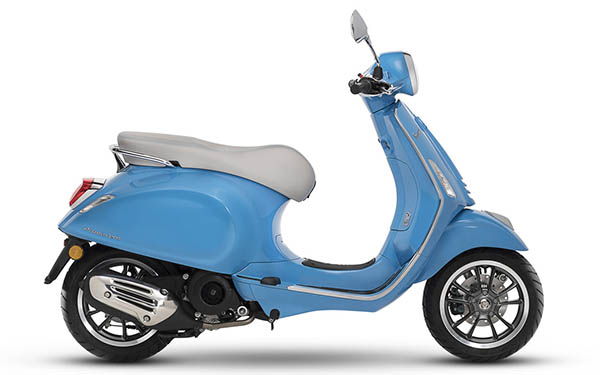 Ah, the old moped vs scooter debate – it never goes away but we’re here to settle it, once and for all!

Mopeds and scooters offer a cost-effective transport option for new riders, or those looking to keep costs down. The simplest bike to start out a long career of happy and safe riding is undoubtedly a moped, or actually, is it a scooter?

There is a lot of confusion over what differentiates these two types of transport, and which one is the best one to buy. Not just for new riders, mopeds and scooters are a popular option for more experienced riders too.  Looking to settle the differences once and for all?  Read on…

The Difference Between Mopeds and Scooters Explained:

What Is A Moped?

The word “Moped” is an amalgamation of the words “motor” and “pedal”, proving that these little machines started life as a motor powered pedal bike – the sort of things French teenagers would use to get to school or, more likely, to woo members of the opposite sex with. That said, they don’t come with pedals these days and even when they had pedals, what self-respecting teenager would want to use them?

Moped used to look more like bicycles, with larger wheels and a ‘step-through’ frame but these days, often the only way to tell the difference between a scooter and a moped is either the badge on the bike or the speed it’s being ridden at!

Mopeds are defined by their engine size, speed and output. Most mopeds will have an engine size of 50cc or less and a modest top speed of around 28mph.  Not one for the speed freaks, but perfect for newbies on the roads, or those who enjoy a more leisurely pace, their speed, or lack of it, isn’t the real draw for moped riders.

Mopeds are generally cheaper than scooters, due to their smaller engine size, and are very economical to own and run.

In some cities, like London for example, it can be far cheaper to buy a moped to get you to and from work every day as it can be to take public transport.  Vintage mopeds are also making a comeback with the hip and the trendy more than happy to be seen on a motorised pedal bike, to remind them of their misspent youth.

Mopeds can be ridden from the age of 16 if you have a provisional license and complete your CBT.  When you pass, you can ride a moped with a maximum engine capacity of 50cc and a top speed of 28mph.

What Is A Scooter?

A scooter, is, funnily enough, a bit like a moped! It is the engine size, however, that sets the two apart.

Scooters do not come with a set sized engine and you can get a huge range of engine sizes, from 70cc right up to 800cc!

This means that a scooter can obviously achieve much higher top speeds and has a far greater capability on the road. Given its greater power and speed, a scooter will also be more expensive to buy and run than a moped.

Scooters tend to have a big fan-base with lovers of all things retro and even a modern day scooter is the perfect hip transport for trendy young things living in urban environments. Like mopeds, they are fairly cheap to run and insure and are a practical alternative to a more expensive, high powered motorbike.

What is a Maxi Scooter?

The term Maxi Scooter refers to larger engined scooters. Back in the day, it used to be easy to classify the different types of scooters, you had 50cc mopeds, 125cc scooters and then big engined (usually 500cc+) scooters, which were called maxi-scooters. There was almost nothing in between.

However, as scooters have risen in popularity, so has the range available. Now the variety of engine sizes is vast. Take Piaggio’s Vespa for example, they sell 50cc, 125cc and 300cc scooters, yet they all look very similar.

So what defines a maxi scooter? For some the dividing-line is capacity alone, with most quoting 250cc as the line; anything below 250cc is a scooter, above 250cc and you’re in maxi scooter territory.

For others, the defining line is where the engine is placed. A tradition scooter, they argue, has the engine mounted to the rear of the bike, in most cases over the rear wheel. Some of the larger-engined scooters source their engines and running gear from motorcycles and therefore can’t locate it all over the rear wheel, instead it’s slung under the chassis – this makes them maxi-scooters.

Then for others, it’s all about wheel size. A scooter has small 12″ wheels, just like the majority of Vespas, almost all 50cc moped and the majority of 125cc machines. Maxi scooters have larger wheels, often 15″ or 16″. This theory works, until you look at the likes of Honda’s SH125, which has 16″ wheels but a 125cc engine. Is it a maxi-scooter? No. However it’s elder sibling, the SH300 has the same chassis, with the same 16″ wheels but a 278cc engine, making it a maxi-scooter.

OK, so we might not have given you the crystal clear answer you were looking for but we have given you all angles of the story! So, like everyone else; make your own mind up as to what a maxi-scooter is.

The best scooter for you

We’ve put together a guide on the best 125cc scooters or, if you have a full A or A2 licence you can ride a larger-engined maxi scooter.

Is a Vespa a moped or a scooter?

A lot of people think Vespa is a manufacturer but actually, Vespa is a brand of scooter, produced by Piaggio. Vespa is Italian for wasp and is a nod to the buzzing noise that a small two-stroke engine makes. The first Vespa was produced in 1946 but now there are over 11 different Vespa models.

Vespas can be either a moped or a scooter. That’s because Vespa make bikes with an engine size as small as 49cc (a moped) but right up to the GTS300 which has a 278cc engine which makes it a bonafide scooter.

Are all scooters automatic?

The vast majority of scooters are automatic and use a Continuously Variable Transmission (we’re guessing 99% of scooters on the road).

The only ‘manual’ scooters are vintage ones, like old Lambretta or Vespa models which have three gears. The clutch on the left hand bar, just like on a motorcycle and when you pull in the clutch lever you twist the left-hand bar and that changes gear.

However, some scooters do come with an automatic gearbox that contains 6 gears and Dual Clutch Transmission (DCT). These are usually maxi-scooters, i.e. scooters over 125cc. Honda’s Integra scooter has a 745cc engine, twin cylinders and a 6-speed DCT transmission. Essentially it’s an automatic motorcycle on a scooter chassis.

We hope that has cleared that up for you!  Happy riding!