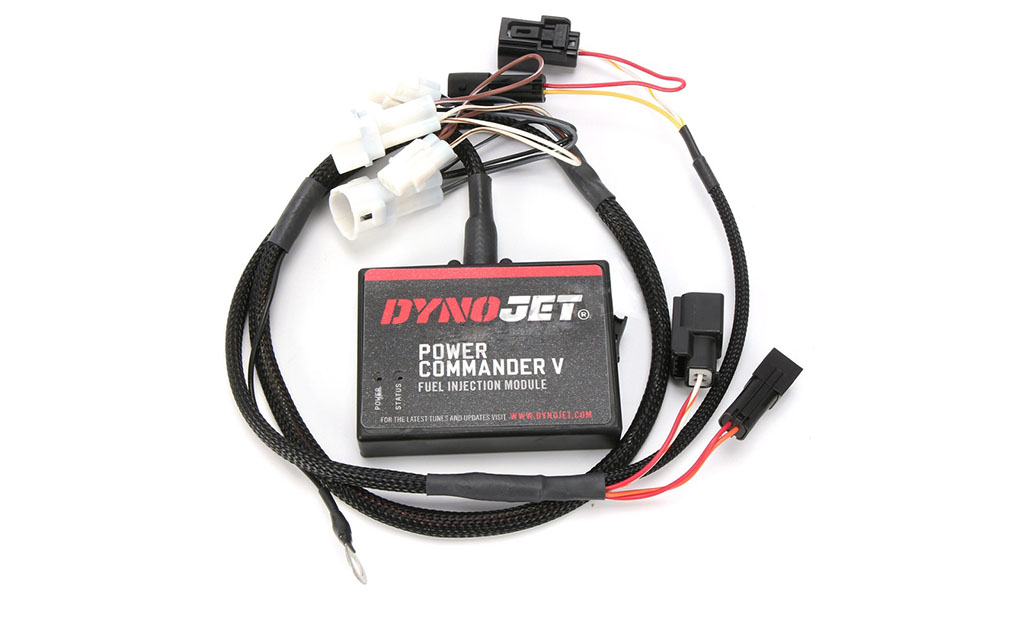 What is a Power Commander?

A common question, especially for those new to motorcycling, is ‘What does a Power Commander do?’

A Power Commander is the name of a device, made by Dynojet, that enables you to adjust the fuelling on your motorcycle.

This allows you to modify the stock settings and change the fuelling so that the air to fuel ratio can be set at an optimum level.

For most riders, the appeal of a Power Commander is that it enables you to boost your bike’s horsepower and torque.

Is a Power Commander Worth It?

Installing a Power Commander won’t improve the bike’s horsepower or torque on its own. To get the best from a Power Commander you have to tune it to suit your motorcycle. This involves modifying the map or uploading a new map.

You can plug it in and upload a pre-configured map for your bike, which will improve the throttle response as it can adjust the fuelling to suit. When your bike comes from the manufacturer, it has to meet emissions regulations and so the ECU isn’t set to produce peak power or even perfect throttle response. The Power Commander piggybacks onto the system and with a map designed for your bike, you can improve the engine response by smoothing out the fuelling.

A proper installation will be done in conjunction with a dyno run. The mechanic will run your standard bike up on the dyno, note the areas where it can be improved and then after fitting the Power Commander, they’ll be able to amend the fuelling across the rev range, possibly leaning it out in some areas or making it richer in others.

This smooths out the air:fuel ratio so that it is optimised for your engine.

If you fit an aftermarket air filter or an exhaust system, you’ll change the rate at which air can be fed into the engine and the exhaust gases removed. This can mean the bike runs badly and the throttle response is fluffy. A Power Commander will help you adjust the fuelling to not only crisp up the throttle response but also make the most of this improved intake and expulsion rate, to add in more fuel and air and help the engine produce more power and torque.

What’s the difference between a Power Commander III and V

They do exactly the same job but the 5 is about half the size of the PC3. However, both maintain, customise and tune your bike’s air to fuel ratio. You can quickly download maps to both, making them Plug and Play.

The PC5 has a few more features. It is easier to connect a secondary fuel module and a quick-shifter with a Power Commander V. Another feature of the 5 is the ability to configure by throttle position and also by the gear you’re in.

The PCV has a wider range of fuel change ratios, a negative 100% to positive 250% range, compared to -100 to +100 on the PC3. This makes the PCV the best option for sportsbikes with two banks of injectors (8 in total).

If you have an older machine, (from 2000 to 2010) the PC3 will probably be a better option as there will be more fitments available for older bikes (plus lots more second-hand ones available).

Another main difference between the 3 and the 5 is that the 3 will have three buttons to help you to tune it. However, those buttons are only a rough guide. The 5 doesn’t have those buttons but any adjustments should be made on the computer, the manual buttons on the PC3 are crude.

Where to buy a Power Commander?

If you want to save money, you can always check out eBay and grab a second-hand PC3 or PCV. There are a few bargains out there.

However, if you want to ensure you’re buying a unit that’s not faulty in any way then it’s best to buy a new one.

The most advanced Power Commander from Dynojet. The PCV allows you to plug and play and adjust fuelling with preset or custom maps, which can be downloaded onto the device. It can be programmed to work with a quick shifter, you can auto-tune or add in two maps, one for fuel economy and one for outright performance.

You can add in an ‘auto-tune’ feature to your Power Commander V. This is a universal fit O2 sensor and a CAN connection cable, which plugs into the module.

The Auto-Tune monitors the exhaust gases and then sends this info back to the PC5 box, which then adjusts the fuelling to suit. It can be configured to run at all times or you can set it up to work with the ‘map switch’ port, so you can physically flick a switch which would then change to your standard fixed map or flick again to go back to your auto-tune map, which dynamically adjusts fuelling from a preset map.

If you like to change your parts regularly or if you can’t get to a dyno centre, an auto-tune box is a good solution for you.

There are a lot of myths about Power Commanders, here we dispel the common ones.

Power Commanders don’t like the rain – This isn’t true. The PC is a sealed unit which is waterproof. If it’s installed badly (ie in an exposed position or with cables that have rubbed on another part, exposing the wires) then it could malfunction.

If your battery goes flat you lose the map – This isn’t true. The map is stored on a solid-state memory, which means if you lose power the map won’t be erased.

You can tune your Power Commander wth an iPad app – This is false. The Power Commander map can only be tuned with the right software on a PC computer. There is no Mac version available.

This video below gives you a really clear step-by-step guide on how to install a Power Commander.

You don’t have to be handy with the spanners but you do need to know what you’re up against before you start removing parts from your bike.

If you can adjust your chain, you can fit a PCV. Just allow an hour to get it all done.

You can download the firmware, software and a user guide from this link here.

You can download a map (or various maps) for your bike by visiting the Dynojet UK website here. Choose your bike from the dropdown menu and then look on the left-hand side menu for the “See all downloads for my bike” link.

The name Power Commander is a bit like Hoover – everyone refers to it when they’re referring to a fuel-controller or fuel-management system.

There are alternatives to the Power Commander from companies such as Dynatek, Thundermax, Cobra, Techlusion, Yoshimura and Juice Box.

However, Dynojet’s Power Commander is by far the dominant force in the motorcycle market. Every dyno operator will know how to install and configure a Power Commander, plus they will probably have worked on a similar bike or setup to yours, meaning they can refer to their existing maps and dyno charts to get the best from your bike.

Another popular alternative to a Power Commander is an ECU reflash. There is a stock map on your bike’s ECU and most engine tuners will be able to get access to it. If you bolt on an exhaust or other performance modifications, your tuner can dyno your bike to see how it runs. They can then download the map that’s on your ECU, tweak it to improve the fuelling and then reupload it (or flash it) back onto your ECU.

Can a Power Commander damage your bike?
It is possible but not likely. A Power Commander gives you the ability to adjust your motorcycle’s air to fuel ratio, which means you could set this so the bike runs too lean. However as the Power Commander can’t send any current to the ECU it is very unlikely it will damage it.

Do You Need a Power Commander with a full exhaust system?
You don’t need one but the chances of the bike running as well as it could after you’ve fitted aftermarket parts like an exhaust or air filter are minimal. A Power Commander gives you the ability to optimise the bike’s fuelling.

Do they make Power Commanders for cars?
No, they don’t. Cars tend to have their ECUs flashed or you can install some systems like a Carberry ECU.

Thanks to the following websites which helped us research and write this Power Commander guide: