Lithium batteries require a specific voltage and limited current to avoid overcharging, which is why investing in a lithium battery charger is the best choice. A lot of Li chargers come with automatic cut-offs so your battery won’t overcharge, and they also emit the correct voltage, so you don’t have to worry about any unwanted fire situations.

This article explains the pros and cons of lithium batteries and exposes some myths surrounding them so you can make an informed choice. We also give you some recommended Li chargers, which won’t break the bank.

You may see lithium batteries described as LiFePO4 batteries. This is the chemical name for Lithium (Li) Iron (Fe) Phosphate (PO4) which is essentially the chemical makeup of the cell.

Like anything new, lithium batteries have got bad press and myths about their reliability have circulated. Here are a few of them we can debunk.

Catching fire – Larger lithium batteries for motor vehicles are larger and made from a Lithium-ion-Phosphate blend (LiFePO4) which is a lot more stable and carries a lower risk of chemical instability.

Lithium battery failures – the technology has advanced enough to include Battery Management Systems (BMS) which balance the discharge and recharge loads. BMS shuts down the battery if an overcharge is detected to prevent overheating and the potential to catch fire.

The lifespan is significantly reduced compared to lead-acid batteries – Before BMS were incorporated, lithium batteries could be run down so much they couldn’t be recovered. A lithium battery which has a built-in BMS will prevent this happening. If you’re looking for a lithium battery, a quality brand will usually use a battery management system but these are not essential.

Lithium batteries won’t work in the cold – this is true to an extent. They produce less cranking power when very cold. However if you live in a colder climate, warming up your battery before use prevents their unreliability. Turning on your lights or attaching your heated gloves will start to draw from the battery and will warm it up.

Specially designed to charge and maintain 12V Lithium batteries, the OptiMate 0.8A is fully automatic and protects against user errors as there are no switches to operate it. This compact charger is perfect for LiFePO4 12V batteries from 3Ah – 50Ah.

Designed to maximise Lithium battery performance and lifespan, the Lithium XS is a compact microprocessor-controlled charger recommended for LiFePO4 batteries. For use on cells from 5Ah – 60Ah, this charger automatically charges upon connection and stops when the battery is fully charged, so you don’t run the risk of over-charging.

How to fit a smaller motorcycle battery 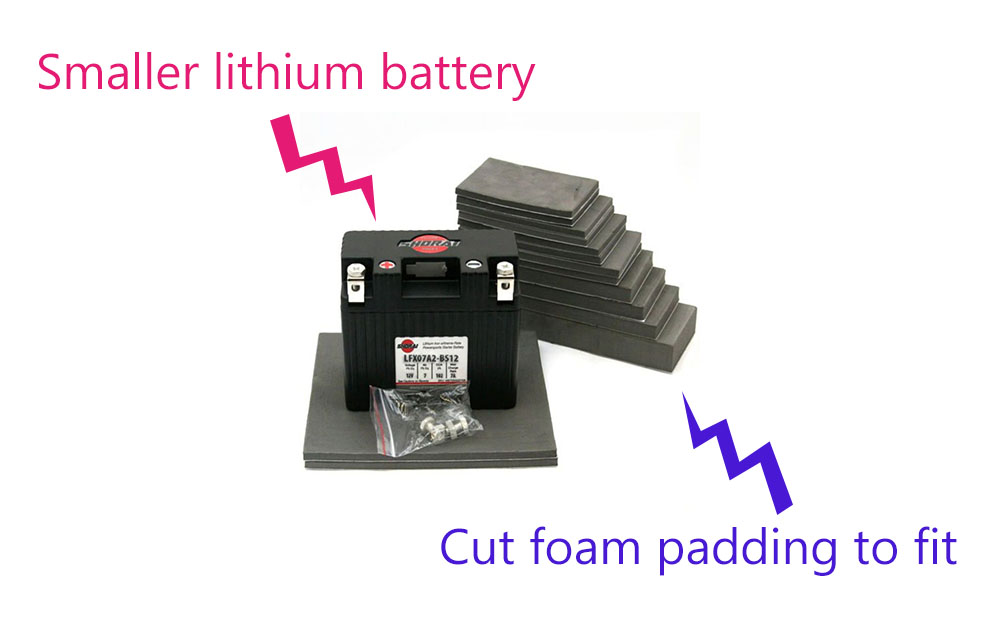 A lithium motorcycle battery will be approximately 50% the size of your conventional lead-acid battery, which can cause a problem.

Your bike is designed with a battery box to accommodate the standard battery and keep it secure. A lithium battery will rattle around in this battery box and it’s likely that your terminals won’t connect as the wires won’t be long enough.

The best solution is to use a dense foam which you can cut to size in order to easily position your lighter and smaller lithium battery and properly connect it to your bike’s electricals.

Any dense foam will do but we’ve picked this modelling foam which comes in handy sheet size and is easy to cut. Use some double-sided tape and it’ll be a factory-job!

Modelling Foam  / See it on Amazon

Which bikes come with a lithium battery as standard?
High-end bikes such as Ducati’s Panigale V4S and V4R, where weight saving is a priority. As lithium batteries reduce in price more bikes will feature them.

Can you charge a lithium battery with a normal charger?
Theoretically, yes, although it is not recommended. A standard charger for a standard battery can be used as long as you check the voltage, inputs and outputs of power match your lithium battery’s requirements. If you don’t know what you are doing, the risk of you getting this wrong and killing your battery is very high.

By using a lithium charger, there is no risk of overcharging, overheating or power supply issues.

Should lithium batteries be left on a charger?
You can leave a lithium battery connected to a charge as long as the charger has an automatic shut off. If your charger does not have this feature, you run the risk of overpowering your battery which leads to failure and overheating.

What is a 18650 lithium battery?
A 18650 is a rechargeable lithium-ion cell battery which is often found in flashlights, laptops and other small electronic devices. The name is derived from its 18mm x 65mm size.

Can I fit a lithium battery to my bike?
In theory, any bike built after the early ’80s is capable of running a lithium battery. Your bike must charge between 13.4V and 14.6V. Any less, and the battery won’t charge, any more and it is likely to overheat. If your bike falls out of this voltage range, you need to replace your charging system.

Thanks to the following websites which helped us research and write this lithium motorcycle battery charger guide: