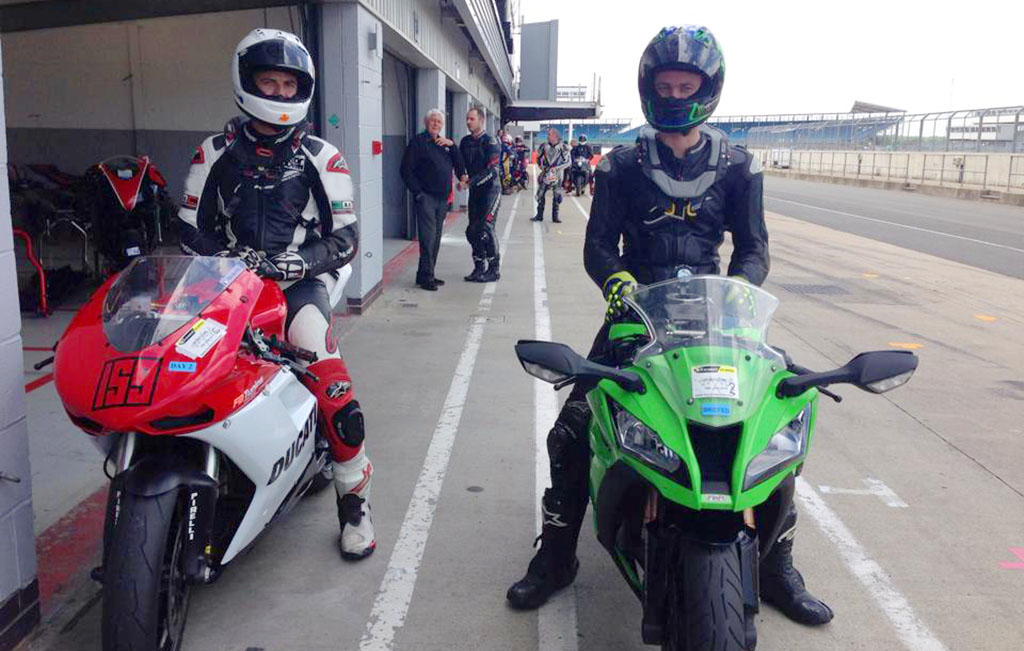 Neck braces are popular in the world of Motocross, extreme rallies like the Dakar and to an extent Trials and greenlaning but for some reason they’re not that common on the roads or race tracks.

You rarely see a pro-MX rider without a neck brace yet you rarely see a pro road rider wearing one. Is it due to a perceived lack of comfort or range of movement? Surely not; motocross riders have to move their heads a lot more than tarmac racers, don’t you think?

In the MX world, neck braces vary from the basic foam-types – which are called Race Collars – that you also see in junior motorsports, like karting, right up to proper shoulder-braced technical neck braces.

For road bikes, there are limited options – they’re technical braces that sit on your shoulders, rather than foam ones that sit around your neck. The image above shows me and my brother both wearing Leatt braces. I’m on the left, wearing the STX RR and my brother’s wearing the more road-focused STX.

The history of motorcycle neck braces

Neck braces were invented by a clever man called Dr. Christopher Leatt and his first patent was filed in 2003. Leatt invented the neck brace after watching his son racing motocross and witnessing the tragic death of another competitor.

Since the original Leatt other manufacturers have followed suit. Alpinestars, Atlas, EVS, and Moveo created their own versions, while Klim, BMW and popular MX brand Scott sold a neck brace that was a re-branded Leatt.

However, the uptake of these road-orientated neck braces has been slow. It’s 15 years since the original Leatt but they’re not looking like becoming mainstream in road-riding circles.

I honestly think it’s the latter. We want to look like we know what we’re doing and a neck brace gives off the impression we’re not that confident in our abilities, so we’re taking every measure possible to limit the damage our impending accident is going to have.

The idea behind neck braces is a simple one – to prevent the over-extension of your neck in the event of an accident and therefore reducing the risk of injury.

The brace prevents hyperflexion  (think chin touching chest) or hyperextending (when your head tips too far back) of your spine. Also the neck brace helps spread the load of any impact through your upper body rather than just your neck and spine.

This over-extension or impact can cause serious injury, such as paralysis or even death.

During the 10-year study, there were 239 recorded cases of Critical Spine injuries without a neck brace, and 26 with a neck brace.

In the motocross world at least, you’re 12.5-times as likely to suffer a serious neck injury if you’re not wearing a neck brace.

Having worn both the Leatt STX, the RR and the Alpinestars Bionic Neck Support neck brace on the road and track, the only downside I can think of is that lifesavers are harder. They’re not impossible, you just have to do them differently.

Rather than just twisting your neck as far around as it’ll go, you’ll be limited in how far you can twist your neck, so you have to compensate with a bit more shoulder twisting. On a sportsbike it’s harder due to your riding position but on a more upright bike like an Adventure bike or Naked, it’s easier. You get used to it pretty quickly.

Are you seeing the benefits?

Some people still don’t buy into these statistics and I suspect that they’ll never be converts. But if I told you that riders who crashed without a helmet were more than 12-times as likely to suffer a serious head injury than those wearing a helmet, you’d laugh at me for stating the obvious.

Neck braces work. Whether you want one or will ever need one is, to a certain extent, down to you.

The STX RR is Leatt’s top-end neck brace, designed with performance in mind, the frame is made from carbon-fibre to keep the brace as light as possible. It weighs 690g which actually sounds heavy but once it’s on you don’t notice it. It’s thinner than the STX and you notice that more than the weight. Once you get rolling, you’ll only remember you’ve got it on when you do a lifesaver as you’re leaving the pits. After that, it’s just you and the track.

The STX is Leatt’s original neck brace, designed with road riding in mind but you can wear it on track. It weighs 80g more than the RR at 770g. You can barely notice the weight but you can notice the size. The STX is that bit bigger than the RR but again once you’re rolling you hardly notice it. It’s far cheaper than the STX RR and if you’re not doing any track riding it’s the one I’d go for.

The History of Leatt

This short video is a quick introduction to Leatt, the history, the concept and it also shows lab tests of the brace in action.

A Doctor (and neck brace convert) shares his experiences.

South Africa Doctor and biker Matthew Snyman had experience of motorcycle neck injuries before he wore a neck brace. Then one day he T-boned a car while wearing his neck brace. Here’s his story:

“If you ride a motorcycle in any shape or form, you should be wearing a Leatt neck brace. Period.

After my experiences with the neck brace, as a medical doctor, a motorcycle rider, and a crash victim, I feel I have an obligation and a duty to tell everyone about this device. A neck brace, like a helmet, should be an essential part of your gear.

My experience with Leatt’s neck brace began soon after I started commuting to work with my motorcycle. I wore it religiously every day after receiving one as a birthday present from my family, already having seen a range of motorcycle neck-injuries in casualty.

I then had my first practical experience with the brace, a severe, life-changing accident that left me with two broken hands and a severely broken right wrist, putting me out of action for four months. For weeks I was in severe pain, and couldn’t use either hand.

Basically, the accident involved me T-boning a car at high-speed, taking the impact to the chin and sternum. On arriving in casualty, the ER doctor was absolutely amazed that my neck was intact, the X-rays and CT scan showed absolutely no fractures or abnormalities, I didn’t even have whiplash or a stiff neck, and this was after face-planting on a car roof with my body following over me.

The Leatt brace had not only prevented my neck from over-extending, but had taken the brunt of the impact from the side of the car roof. The roof had connected the brace on its front lip, squashing most of the carbon fiber in the brace flat, taking all the impact off my sternum and my aorta behind it.

This sort of force applied to your sternum (as is often seen in car accidents from the steering wheel) squashes your sternum right up against your spine, destroying everything in-between: i.e. your aorta. This is near-instant death. The brace had not only saved the use of my limbs, but also my life.”

Will a neck brace fit over a textile jacket?
Yes, it’ll fit over pretty-much any motorcycle clothing and there are different apertures available to suit different neck sizes.

Thanks to the following websites which helped us research and write this motorcycle neck brace review: