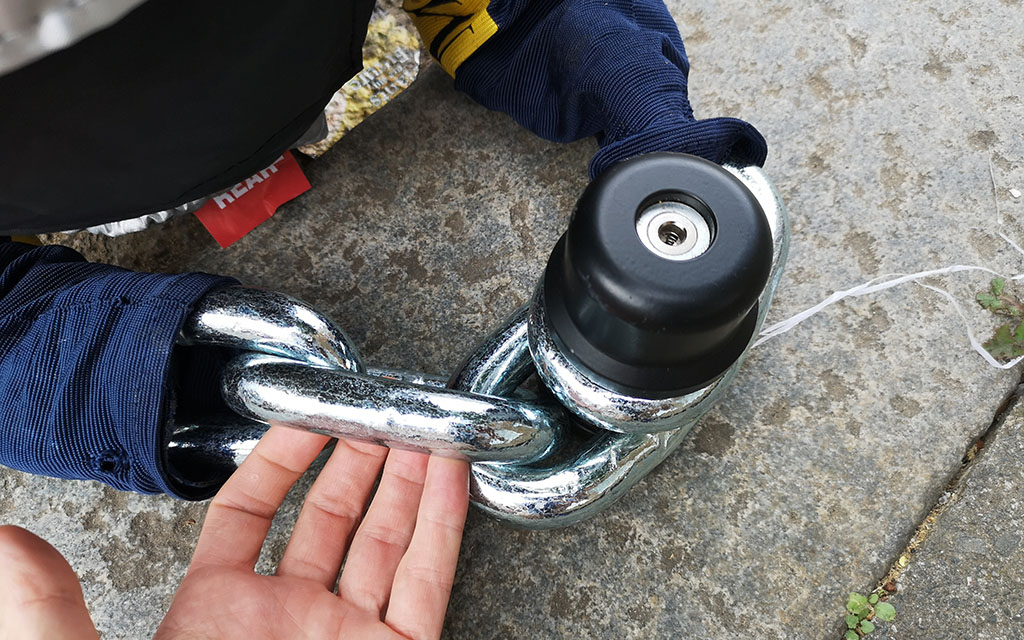 It’s sad to say but gone are the days where using the best security chain guaranteed your motorbike would still be there the next day.

The rise in powerful, battery-operated angle grinders, has enabled low-life scumbags to cut through a lot of previously uncuttable, uncroppable chains.

However, that doesn’t mean we should give up. Quite the opposite.

It might be possible to use a portable angle grinder to defeat a chain but it still takes time and creates a lot of noise, not to mention, sparks. Technically speaking you need just 60-seconds to cut through a 22mm chain but that’s assuming the thief can do it in one go, that they have good purchase and access and that they’re competent at getting a groove in the link immediately.

The reality is, they’re not operating under laboratory conditions and thieves that use angle grinders would still prefer to cut through a weedy chain. But they’d also rather do it with no-one looking.

If you buy a quality hardened chain, it will be almost impossible to bolt-crop, safe from sledgehammer attacks and only susceptible to prolonged angle-grinder attacks.

One of the best tips is to park your bike in a reasonably busy place if you can and ensure it’s always covered. A thief wants a weedy chain on an expensive bike that’s parked out of the way. Your job is to deter them as much as possible and that means slowing them down and pitching their surroundings against them.

It’s a sign of the times that 10 years ago a 16mm chain was almost unbreakable, save for a few prolonged methods of attacks. Then along came the 19mm which put an end to any bolt-cropping antics but now the specialist security chain manufacturers have launched ranges of 22mm chains, to deter the vast majority of thieves, even those with powerful angle grinders.

So large and heavy are these 22mm chains that they’re almost unusable for day-to-day use but if you want the best security chains, they win, hands down. You won’t find many of these in the latest RiDE magazine motorcycle security chain test.

The image above shows 4 different chains that I use for different purposes.

There’s a huge difference in the weight, portability and security offered. All can be stashed under the seat of a scooter. However on a motorbike, transport is a slightly harder proposition.

What Length Security Chain Do I Need?

It’s important to buy a security chain that’s the right length. Too short and you might not even get it around your motorcycle’s wheel and it would be annoying if it just wasn’t quite long enough to go through a ground anchor.

Too long and you’re paying for links you don’t need, you’re having to cart more weight around and you’re potentially making a thief’s life easier by giving them better access to attack a free section of chain.

The images below give you a good idea of what different chain lengths look like when wrapped around a 180-section rear tyre.

A 100cm chain is the minimum length I’d recommend if you want to chain a single wheel. You could just about get it through a ground anchor – depending on the type of course. Chains with smaller diameter links are more flexible but I’d go for a 1.2m chain to comfortable fit a ground anchor.

As you can see, a 150cm chain gives you more room to get it through a ground anchor and you’d also be able to reach a fixed post like a lamp post when out and about.

200cm is overkill for most applications. I use this length to go through the frame of one of my bikes and then through a ground anchor. It’s not quite long enough to link the front and rear wheels together. If you are locking your bike to a lamp post, this is probably a safe length to go for. Any slack can be wrapped around the post a second time.

Chains that would probably keep a warship at anchor. Almax have created a 25mm security chain called the Series VI. So large are the link on this 25mm chain, they weight over 1kg each.

Ideal for your garage if you want the ultimate security and you won’t be moving the chain that much but as good as the chain is, you need to make sure it is secured to a solid object as your bike and the chain could be lifted into a van if it’s not looped through a ground anchor.

Cannot be bolt-cropped. Impervious to HSS hacksaw attacks. Increased resistance to sledgehammer attacks. Supplied with a hard-wearing 1000 Denier fabric sleeve. Available in 1.85m lengths and supplied with a Squire SS100CS Stronghold lock – it weights a massive 24kg. From £499.

Totally unportable and practically unusable for the every day. The links are so large on these 22mm chains that they weigh 1kg each. Plus you’ll be limited on choice when it comes to the padlock you can use to secure them with.

Not the sort of thing you can carry on your daily commute – and they won’t fit through most council ground anchors either. If you’re securing your motorbike to a lamp post outside your house, it’ll probably make the lamppost the target but if your bike’s at that much risk of being pinched, you’re better off parking it elsewhere.

Milenco claim their 22mm chain is constructed from the highest quality steel with a high grade, high visibility, non-corrosive plastic cover and sleeve for scratch protection. It’s only available with the Diamond lock. It’s available in 1m, 2m and 4m lengths. From £250.

The 22mm chain from Pragmasis claims to be impossible to bolt-crop by hand and it presents a serious challenge for angle grinders. Weighing approximately 24kg for a 2m length, it’s available in 1m, 1.5m, 2m, 2.8m and 3.7m lengths. From £220 chain only

19mm security chains are still heavyweight beasts but they’re far more manageable for day-to-day use. Each link weighs approximately half of the equivalent 22mm link.

A great bet if you have to park your bike outside, especially if you can loop the chain through a solid object, like a ground anchor or around a lamp post.

The Series IV is a 19mm chain made by Almax. They claim it’s bolt-cropper proof against manual attacks. Impervious to HSS hacksaw attacks. Supplied with a hard-wearing 1000 Denier fabric sleeve and available in 1m, 1.5m, 2m and 2.5m lengths. From £90 chain only.

Great option for home use

This hardened steel chain from security experts Squire will defeat all manual bolt-cropper attacks and will defend well against HSS saws, sledgehammers and angle grinders. It’s available in a 1.5m length, making it perfect when coupled with a ground anchor or used around a lamp post. From £190 chain only.

This 19mm chain from Pragmasis might not be as beefy as the 22mm version but it still provides excellent security. Guaranteed bolt-cropper proof, it’ll also withstand sledgehammer attacks and put in a good defence against angle grinders. Available in  1m, 1.2m, 1.5m, 2m, 2.5m, 3m, 3.5m, 4m, 5m and 6m lengths. From £95 chain only.

A 16mm chain is still a heavyweight bit of kit but much more usable day-to-day.

It’s a great portable option for scooter riders who can store it under their seat. The majority of 16mm hardened chains will defeat all manual bolt-croppers and they’ll put up a decent defence against sledgehammers and angle grinders.

When used with a bike cover and another later of security, like an alarmed disc lock, a 16mm chain is a brilliant option to keep your motorbike secure.

The Almax Series III is portable but only just. Weighing in at around 5kg per metre, it’s a quality chain that can be stashed under a scooter seat or carried in a motorcycle tailpack. Bolt-cropper proof and resistant to HSS saw attacks, it’ll withstand sledgehammer and angle grinder attacks. Comes in 0.8m, 1.5m, 2m and 2.5m lengths. From £70 chain only.

PRagmasis make 22mm and 19mm chains but this 16mm one is a great blend of portability and security. Made from high-quality hardened steel, it’ll withstand bolt-cropper attacks and prolonged sledgehammer attacks and put up a good defence against an angle grinder too. Available in 0.8m, 1m, 1.2m, 1.5m, 2m and 2.5m lengths. From £90 chain only.

Oxford make a range of budget security which slightly hampers their credibility when it comes to serious motorcycle chains but this 16mm Nemesis won a RiDE Best Buy award. It is made from CroMo hardened steel which resists bolt-cropper, saw, drill and angle grinder attacks. It’s available in 1.2m, 1.5m and 2m lengths. Approximately £120 with padlock.

Squire are known for making quality padlocks and their chains are great too. This 16mm chain is made from hardened steel alloy and features a zinc-plated finish. It will beat bolt-croppers and sledge-hammer attacks while putting up a decent defence against angle grinders. Available in 1.2m, 1.5m and 2m lengths. From £70 chain only.

Read any interviews with thieves and they always say they hate alarms and they hate floodlights. No-one’s invented a security chain with a floodlight but some clever spark has created one with a built-in alarm.

120dB alarm will do the business

Kovix make a great range of security, from disc locks to chains. This KCL10 security chain uses 13mm hardened steel, protected from a heavy-duty fabric sheath. It also packs a seriously loud 120dB alarm, which will make a thieve’s life pretty stressful if they’re going to try and take it on. This is a very good everyday option. From £110

Can I just use my steering lock?
You might notice that some bikers who lock their bikes with a few layers of security don’t use their steering lock. Why is this? It’s because a steering lock takes just seconds to break and yet it can be a very costly repair. Better to let your proper security defeat the thieves rather than incur more costs.

Do motorcycle chains get insurance discounts?
Yes. Most insurers will offer discounts for any additional security you use but they may want proof it was being used if your motorbike is stolen. If a product is Sold Secure or Thatcham rated it will likely get a larger discount.

Thanks to the following websites which helped us research and write this motorcycle security chains review.