An alarmed disc lock is a great bit of security. Not only does it prevent opportunist bike thieves from just snapping your steering lock and pushing your bike away but it also makes a racket, meaning the thieves either carry on, knowing that people in the vicinity will know they’re up to no good or they scarper.

What a disc lock is good for

Disc locks aren’t perfect. Even the best ones can be defeated and some times thieves will just cut the brake disc rather than the disc lock or just lift the bike into a van.

That said, not having any security is like putting your head in the sand. A disc lock instantly rules out a proportion of motorcycle thieves who’d rather move on to the next bike with no locks and try and steal that instead.

A disc lock rules out opportunists

Using a disc lock will stop a low-life from quickly checking the coast is clear, breaking your steering lock and having your bike away. They’re going to need some tools, whether that’s a hammer, crow-bar or angle grinder to defeat a disc lock.

However, if you’re leaving your bike outside overnight, there comes a point where you’ll have to secure your bike to something, whether that’s a railing, lamp post or ground anchor.

Using two disc locks won’t halve the chances of your bike being stolen compared to using just use one, because a bike can be lifted into a van if it’s not secured to something – no matter how many disc locks you’re using.

Use a disc lock, use a bike cover and ideally chain the bike to something solid; either a ground anchor or a lamp post.

Whatever you do, use some additional security. You just can’t afford to rely on your steering lock.

What to look for in a good alarm disc lock

No matter what they are made from, disc locks are a great visual deterrent, instantly eliminating the least capable bike thieves. However should they be attacked, they need to be able to put up a decent fight. Here's a list of things to consider when buying a disc lock.

This is one of Abus’ toughest disc locks. They do make an even tougher one the Abus 8008) but it’s 50% more expensive and we think you should spend that £50 on a cover or a chain to make the bike even more secure. This lock is seriously chunky and gets great owner reviews. The chances are any thief will take one look at it and move on.

We appreciate that not everyone has £100 to spend on a disc lock which is why this Oxford Boss alarmed disc lock is a good buy, at around £70. It will work on the majority of motorbike brake discs and if it doesn’t fit your disc (it won’t fit a scooter disc) then you can lock it around the spoke on in the rear sprocket. It’ll also double as a padlock for your security chain. 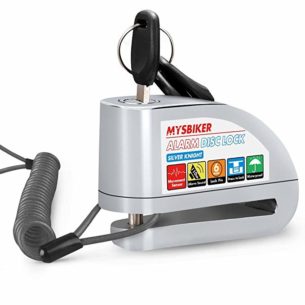 I don’t recommend anyone skimps on security but even a cheap alarmed disc lock is better than no disc lock. It takes just seconds to break the steering lock of an otherwise unlocked motorcycle or scooter and push it away.

The cheapest alarmed disc lock we could find (with decent owner reviews) was this MYSBIKER Alarmed Disc Lock. It gets good ratings from owners but don’t expect any miracles from this lock.

It’ll take a good few blows from a club hammer but lots of thieves don’t want to carry any tools and they’ll just look for bikes with no locks at all. So while we couldn’t recommend this disc lock, it’s definitely better than nothing.

Cheap locks are – in the main – a false economy. Think about the value of your bike and the hassle caused if it gets stolen. Is it really worth saving £20 and buying a lesser-quality lock? That decision is down to you.

The most expensive alarmed disc lock

If ‘money ain’t a thang’ then Abus have got a disc lock for you. Those crafty Germans have produced the 8008 which has an RRP just shy of £200 but you can find it online for much cheaper.

The alarm is sensitive which has scored it a few negative points from owners but the plus side is that it’s practically impossible to ride off with the 8008 still fitted to your disc due to the sensitivity of the alarm. 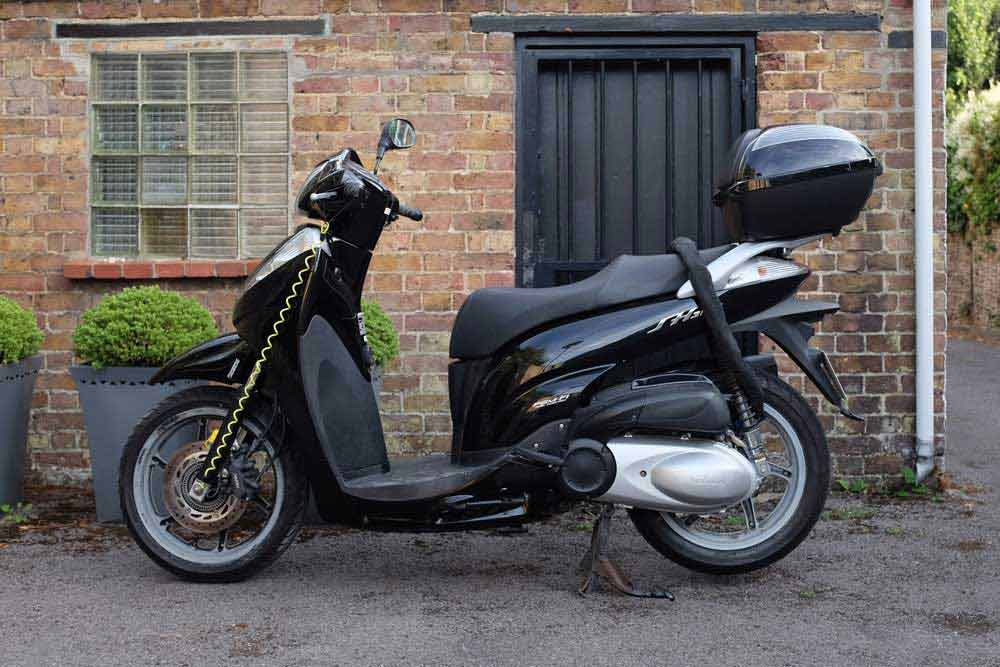 Scooters have smaller brake discs than motorcycles and smaller holes through which to secure a lock. Fortunately, there’s a range of disc locks designed for scooters and the majority of these have a pin size that’s 6mm or smaller meaning they will fit a scooter.

Even though this pin is smaller than the average motorcycle disc lock, most scooter-specific disc locks are designed so that the pin is recessed and protected from attack by a chunkier lock body.

Scooters are great city transport and that often means owners park their scooter on the street, rather than a garage. They also tend to park them at a home location overnight but a different location during the day. That’s why we’ve focused on disc locks that come with alarms, as an alarm is a great deterrent to any would-be scooter thief.

In no particular order here are five great options for scooter riders:

Don’t forget to grab a disc lock reminder cable to help prevent the embarrassing 3mph spill if you try to ride away with your lock attached.

If you can, use a quality motorcycle security chain like the ones in our guide. If you have a scooter, you can easily carry a 16mm chain around in your underseat storage.

Sold Secure has 2 levels of Motorcycle Security Approval (Gold & Diamond) and two levels of Motor Scooter security (Gold & Silver). A recent change has seen the introduction of a machine based cropping test to 70kN to ensure consistency.

Locks are submitted to Sold Secure and manufacturers pay to have them tested. The tests are carried out using a toolkit based on insurance and police information. If a lock can withstand an attack for a given duration, it is awarded a Sold Secure rating.

Thatcham used to test locks with a similar rating system to Sold Secure but as of January 2019 they have ceased to test motorcycle locks and so you should see these ratings slowly disappear from manufacturer’s promotional material.

Get a disc lock reminder cable so you don’t try and ride away with your disc lock still on.

If you ride a scooter the chances are you’ll need a disc lock with a 6mm or smaller diameter pin.

Lock it to the disc’s most central point in between the fork leg and the brake caliper if you can, to prevent the disc easily being cut and the lock from being removed.

Back up your alarmed disc lock with a motorcycle cover. Keeping it out of sight is one of the best ways to keep it from being a target.

Do I need to replace the batteries?

Yes, your disc lock will use either CR2032 button-style batteries or it will use AA or AAA batteries. It’s best not to use rechargeable batteries in your disc lock as these tend not to hold their charge as long as single-use batteries and can be more adversely affected by extremes in temperature.

A Vespa, like any other scooter, will require a disc lock with a smaller pin. Usually this will be 5mm and we have listed manufacturers of these scooter-specific locks above. If you buy an alarmed padlock you can lock this around the spoke of the wheel, although this is not as good at preventing the wheel from turning as a disc lock attached to the brake disc.

Thanks to the following websites which helped us research and write this motorcycle disc lock guide:

How to properly lock your scooter – Bikers United 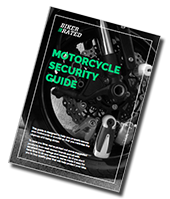 Our monthly email with the best biking experiences, discounts, tips and more. FREE motorcycle security eBook when you sign up.
Over 8,000 bikers have already joined.